Leadership metaphors guide the design of a leadership strategy

“I often describe the use of these cards and their companion, Visual Explorer, as greasing the wheels of conversation … “

Our colleague and Leadership Metaphor Explorer™ artist Bruce Flye posted a report on using LME for a week-long Planning Institute for the National Association of College and University Food Service. As always Bruce has a really good approach to planning, strategy and design. Check out his site Making Voices Visible. Here is an excerpt:

“Idealized Design begins with a systems analysis of the current situation, in this instance provided by a fictional case study representing a campus with an assortment of issues. Once their analyses were complete, we asked them to consider the current leadership culture. To do this we used Leadership Metaphor Explorer, a tool developed by the Center for Creative Leadership with a little help from yours truly. All of the cards were spread out on a table, and we asked the 18 participants to review each. They then picked the one that seemed most like their situation or, if none seemed to work, they picked the card that spoke to them in some way.

As they were working in three groups of six, we asked them to 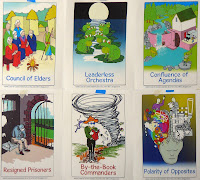 return to their groups and then share their cards and their thinking in turn. Each group was then asked to agree on two cards from their six that seemed to best represent the leadership culture in place on this fictional campus. We then took the two cards from each group and set them aside without discussion.

As the week went by they developed their Idealized Designs. Rather than beginning with the usual mission statement, we worked with Steve Haeckel’s Reason for Being. Pretty quickly, they produced this statement: “Walnut College Food Service exists to provide students with healthy and sustainable food options in an environment that enables them to become successful individuals.” Once each group had drafted its Idealized Design, we borrowed from Appreciative Inquiry and crafted Provocative Propositions to guide the subsequent work as opposed to the traditional gap analysis.

Once they had worked their way through the additional details, we asked them to return to a question of leadership: “What is the leadership culture that will give life to the Idealized Design and its Provocative Propositions?” We repeated the selection of metaphor cards, and then posted both sets for comparison.

The original six, as they described them, depicted a conservative and insular environment. “A Confluence of Agendas” to them represented people each getting something for themselves while the larger whole slowly deteriorated. A “Leaderless Orchestra” to them was an indication of a poorly functioning entity. With the new set, they were quick to see a distinct shift toward an interdependent leadership culture. Even metaphors not normally associated with interdependency had a role in creating it: “Nurturing Parents” reflected the fact that someone would have to teach these new skills and behaviors; “High Performance Engines” described how the college’s senior leadership was going to have to step up its game in order to keep up with the dining services group.

I often describe the use of these cards and their companion, Visual Explorer, as greasing the wheels of conversation, and this was no exception. One participant described how his usual difficulty with verbalizing concepts was completely overcome by having an image to work from.”

For more on the design of leadership strategy, see this Center for Creative Leadership white paper.