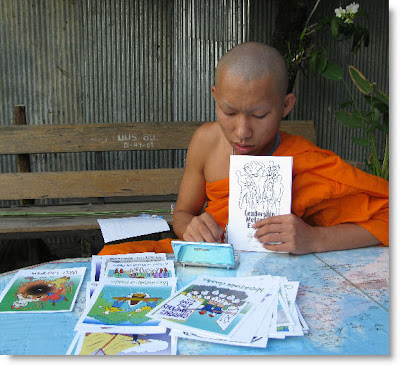 monk chat in Thailand
thanks to Sarah Miller

Clemson and I were talking about the Metaphor Explorer and he asked if I had ever used it cross culturally and outside of the US. Upon reflection, the only time I had was when I was in Prague. Clemson was curious about how some of the cards are being received in less democratic locations. He mentioned some of the cards are very western/democratic and was curious: does anyone have some insight into this? Thanks!

In the last month I’ve used the Leadership Metaphor Explorer deck in Sudan, Kenya, Uganda, and Ethiopia–quite a range of governance and culture and language. The UN-IFAD team here in Khartoum will be taking LME with them as we head to the field tomorrow… heading down South to Rufaa and over to Wad Arakay on the edge of the desert… the entire training will be in Arabic and the locals won’t be able to read the English subtitles on the cards… should be a great test to see how they are received!

My sense is that the newest deck is more global… we’ve replaced a few of the cards and updated some of the other pictures.

Just a quick update… from Sudan.

2 Responses to The global reach of Leadership Metaphor Explorer™