The origins of Leadership Metaphor Explorer™

Bruce Flye is the talented artist and facilitator that helped us create LME. Here are his reflections of how it all got started.

I was there, but I’m still not completely sure what happened. Here’s what I recall. In early 2007 CCL invited me to graphically record their C 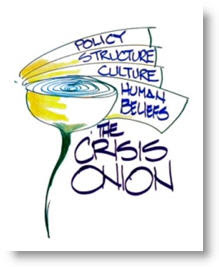 risis Leadership Forum, an event that is a story unto itself. On the second day I was approached by David Magellan Horth, one of the forum’s co-leaders, who asked if I might be interested in illustrating some metaphors they were working on. My initial reaction was one of alarm, and I barely contained my first thought: “I’m not a graphic artist and, furthermore, this is the first time I’ve ever done graphic recording!” Fortunately I went with my second thought and asked “Is this the style of illustration you have in mind?” as we looked at the work on wall before us. David said it was exactly what he had in mind, and from there we went to work.

David and Chuck Palus provided an initial spreadsheet of 35 metaphors that were to be followed by an additional 25 or so still in development. Many of these early phrases prompted immediate images: Courageous Lion Tamers, Death-Defying Tightrope 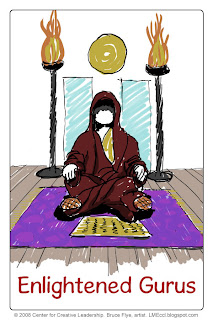 Walkers, Enlightened Gurus. I began generating sketches and e-mailing them in “for review and comment” as we say in the construction business, but I soon found I was in an environment to which I was absolutely unaccustomed. There weren’t many comments on the drawings, and instead they sent more metaphors. It took awhile to realize that I had stepped into a very open-minded culture that trusted emergent process. Over many months we did about 55 or so cards and my work was considered complete. Over all that time I had learned much about metaphors, and had also begun to find myself a style with a tablet PC. Back in my day job, when I was called in to address a very tricky relationship issue within our Health Sciences Division I found I could crank out my observations via metaphor pretty quickly. Then, when David sent a note and asked if I could do another 20 or so for LME, I found they could now flow out rather smoothly. Check that; the production could flow smoothly. Conception was another matter altogether! What were they thinking: Confluence of Agendas? Silicon Valley of Innovation? Network of Peers? Well, we did those, too, and not that differently from the first set in that it was highly virtual collaboration. There were occasional e-mails, and a phone call every now and then, but I didn’t appreciate what was going on until we noted at the end that we had completed this fairly involved product without ever meeting face to face. 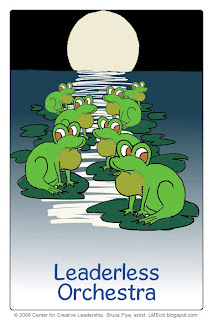 A few of these have become remembrances of a special time in my life. One of the very few hints I was given about their intentions came from David for the Leaderless Orchestra: it’s about positive functioning. When he later saw the frogs on a pond he wryly commented “That’s some imagination you have there.” We actually talked in advance about possible content for Non-Violent Resistors, but while drawing it the violence was so palpable I sent it in asking them to look at it critically as I wasn’t sure they wanted everyone to have the sensations it gave me. And then the whole deck AND the experience of it coalesced into Ubuntu. Writing this now, it occurs to me that this work with David and Chuck has itself become a very powerful metaphor. But that’s another post.

2 Responses to The origins of Leadership Metaphor Explorer™