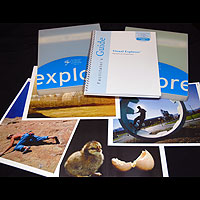 VE is a tool for facilitating creative conversations using visual images. VE helps create meaningful dialogue around complex challenges or difficult issues. Its benefits are in bringing together multiple perspectives, and in creating new perspectives and shared understanding. It is an effective tool to use when people have been stuck in their points of view. Often it is used as a leadership tool; but VE is also useful for classroom discussions, group facilitation, coaching, problem solving, survey panels and focus groups, and in qualitative research. VE is available in a growing number of formats including letter-sized sets of 216 images, more portable playing-card and post-card sized decks.
VE can be used in a wide variety of ways depending on the context. Here are the five basic steps for using VE to facilitate a group conversation around a shared question. These steps can be altered or elaborated for particular situations as described in the VE Guidebook.

1. Choose one or two “framing questions” to frame the conversation. For example a group with a shared challenge might ask: “What is the key to this challenge we are facing?” and “What strengths do we have for solving this challenge?” >>creating effective framing questions.
2. Make the VE images available for browsing. If you are using the full-sized images, spread them around a room on the floor and on tables. Card decks can be browsed in more compact ways, such as on a table top, or simply by thumbing through the deck. Everyone silently browses the images and each person chooses an image for each framing question. “Pick an image that represents or connects to your own response to the question.” The connection of the image to the question can be literal, or it may be emotional, metaphorical, aesthetic, or intuitive (“Let the image pick you”).
3. Each person examines the images he or she has selected, and reflects on how the image connects in any ways to the framing question. “Pay attention to each image you selected. What is it? What is happening in it? What is the context? Anything surprising? How does it connect to the framing question?”
4. The group (or sub-groups) sit in a circle. One person at a time shares his or her image(s) as follows:
First: “Share the image and describe the image itself (forget about any connection to the question for a moment). What is it? What is happening? What do you notice?”
Second: “What connections do you make from the image to the question? How is the image a response to the question?”
Third: Each person in the group responds to the image(s) offered by this first person. Each response may also have two parts: “What do you see in the image? Do you see the same things that other’s see? What stands out to you? AND THEN: “What connections do you make from the image to the question?” After the first person has shared their images around the group in this way, he or she thanks the group, and the conversation moves on to the next person and their image(s). Continue until everyone has shared their images.
5. When this initial dialogue with the images is finished, a certain kind of momentum is often present, and it works well to extend the conversation in whatever direction is important to the group. Subsequently, the most significant images and metaphors can be reused in ongoing creative problem solving, invention, and communication. The images lend themselves to “cascading” to other groups in the same organization, especially in digital form.